[John Tigertail, 34, is a Miccosukee Tribe member who resides on the edge of the Everglades National Park. John was born in Baptist Hospital in Miami Florida, and was brought home to the Everglades as an infant, where he has spent the rest of his life. He was registered to the Miccosukee Tribe in 1977. It wasn’t till 1962 that the U.S Miccosukee Constitution was officially recognized as “Miccosukee Tribe of Indians of Florida.” A combination of traditional Tribal government and modern management form the organizational structure of the present day Miccosukee Tribe. The Tribe is open to Indians who have Miccosukee mothers and are not enrolled in any other tribe.] 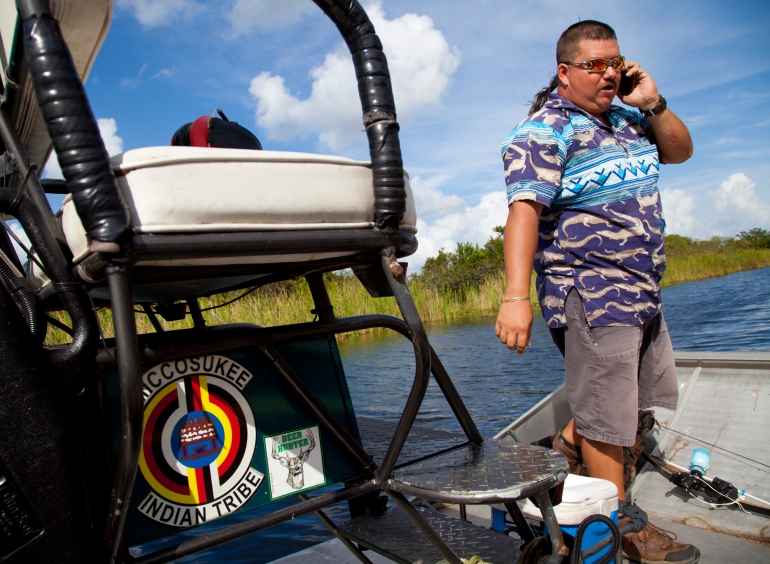 October 7, 2011. (1 of 13) Everglades, Florida. Miccosukee Tribe member, John Tigertail is a resident of the Everglades. John inherited a family business of airboat tours, but took the business up a notch by creating “Tigertail’s Airboat Tours” in 2007.  Not only does John own his airboat tours company but also has been working with the Local Wildlife Unit for 8-10 years. Amongst all that, John still finds the time for hunting and fishing, in order to make a living. John prefers to hunt for his own food to feed his family, but as time progresses, their main food supply has become the grocery stores in the cities of Miami or Naples. (Photo by: Vanessa Castillo) 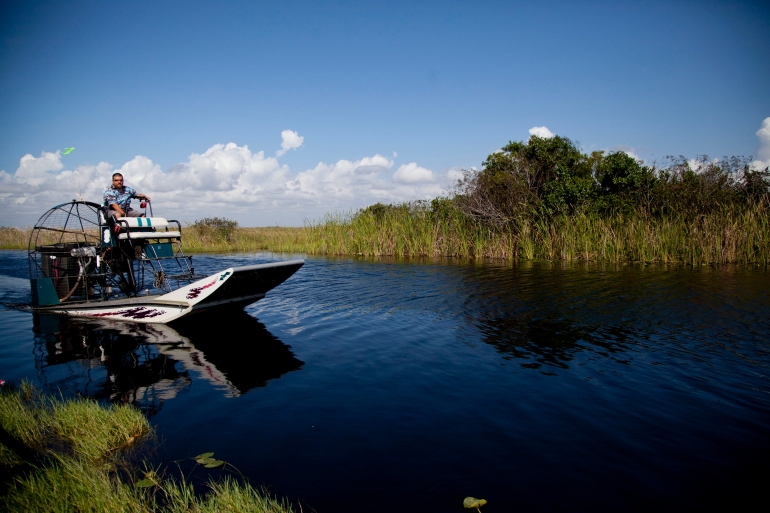 October 7, 2011. (2 of 13) Everglades, Florida. John Tigertail, a Miccosukee Tribe member residing on the edge of the Everglades National Park, in the wca 3A south area considers the Everglades to be his home, his office, his grocery store, his everything. “It’s my whole life” says John, who has been holding tours for the last 16 years.”I love going out on my airboat, I always have. I have baby pictures of me on my father’s airboat, at 7 years old I would sit on my father’s lap and steered the airboats” says John. “Airboats were such a big part of our family history.â His father held airboat tours in the 50’s and 60’s and the family airboat business was passed down to John once his father passed away. Then in 2007 John created his business “Tigertail’s Airboat Tours” 16.5 miles west of Krome Avenue in Miami. “Travelling through the Everglades is best on airboat because the airboats are environmentally friendly, also for me, the smaller the airboat, the better it is for my hunting” says John. (Photo by: Vanessa Castillo) 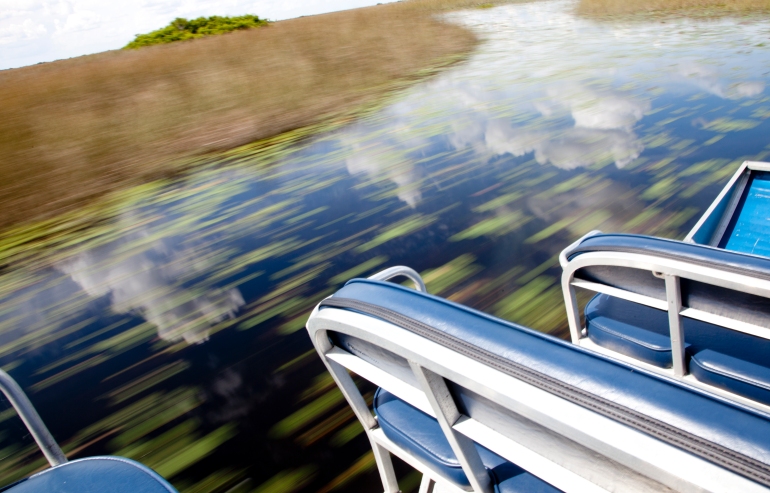 September 30, 2011. Everglades, Florida. Airboats are the main form of transportation in the Everglades. Before they became popular, Micosukkee Indians would travel by dug out canoes made of cypress logs. (Photo by: Natalie Edgar)

October 7, 2011. (4 of 13) Everglades, Florida. A Miccosukee Tribe member, John Tigertail, owner and creator of “Tigertail’s Airboat Tours” shows us the sleeping tiki’s. These are tiki’s in one of the camp sites “Sam / Walter Willie” and according to John, only the Seminole and Miccosukee people are allowed to cut Cypress wood in order to build these tiki’s, which are made up of cypress wood and cabbage palm leaves. (Photo by: Vanessa Castillo) October 7, 2011. (5 of 13) Eveglades, Fl. John Tigertail enjoys bowfishing during his spare time while riding around the Everglades. Hunting used to be the main source of food for the Miccosukee Indian Tribe, although they still occasionally hunt for turtle, deer, gator, and fish. (Photo by: Natalie Edgar) 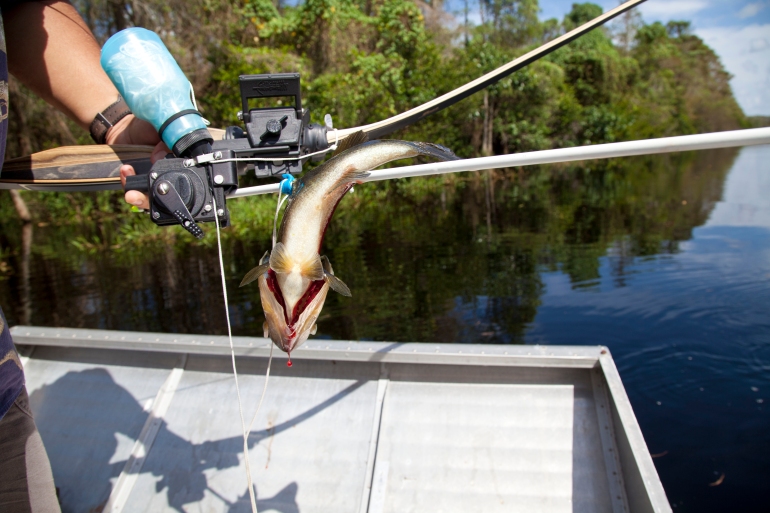 October 7, 2011. (6 of 13) Everglades, Florida. John Tigertail, a Miccosukee Tribe member residing on the edge of the Everglades National Park enjoys going out to certain areas of the Everglades, such as “Swimming Hole” and finds his own food to cook and eat. “Over here we’re hunting and fishing to make a living” says John, who owns an airboat tours business, “Tigertail’s Airboat Tours”. “Growing up we ate a lot from out here – my grandma would cook a lot, and cooked stuff that my uncles, and father, and grandfather would bring back. So growing up, thatâs all we ate. When my grandmother passed, we started visiting the city more often to go grocery shopping or eat out, which led to some us getting sick sometimes, so I try and hunt and fish for my family as much as I still can, I prefer hunting my own food anyway” says John. “I don’t like going into the city much, especially not for the grocery store, though I will start travelling soon for the sake of my wife, but for today, we’re going to eat this 1 pound, large mouth bass fish.” After several attempts, John finally caught the bass fish with his long bow and attempted to catch a second but did not succeed. “This is original. We call our God breath maker, and he made all kinds of people. And one thing that was always said was that how the nature is, how it’s original, thatâs how you could say God wanted it. And then with the animals, they were the first ones here, so humans came after that, and we came from the bloodlines of the animals; that’s why we have clans. So, when we hunt we make sure weâre not going to waste any of breath maker’s naturalizations, so we eat it. I love it out here, I grew up here so hunting is what I wanted to do” says John. (Photo by: Vanessa Castillo) 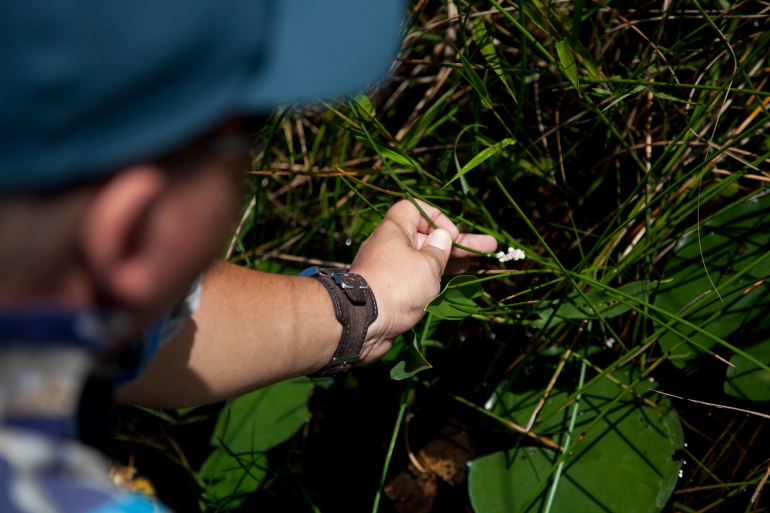 October 7, 2011. (7 of 13) Everglades, Florida. American Indian, John Tigertail has been a resident of the Everglades since he was born. The Everglades is all he lived and breathed for the last 34 years of his existence. A great deal of knowledge is instilled in his brain from hands on experiences and historical family facts. In current visitations, John has noticed native apple snail eggs have been hatching which was odd to him because they were native and South American snails had been imported to the eco system. The fact that John found native snail egg hatchings meant that the apple snails are getting their food by feeding from the plants above and under water and the Everglades snail kite’s, a member of the hawk family, has not found them because 99% of what these Everglades snail kite’s eat are apple snails. “It’s a good sign to find these apple snail eggs, the start having problems because of the fish, water and birds” says John. (Photo by: Vanessa Castillo) 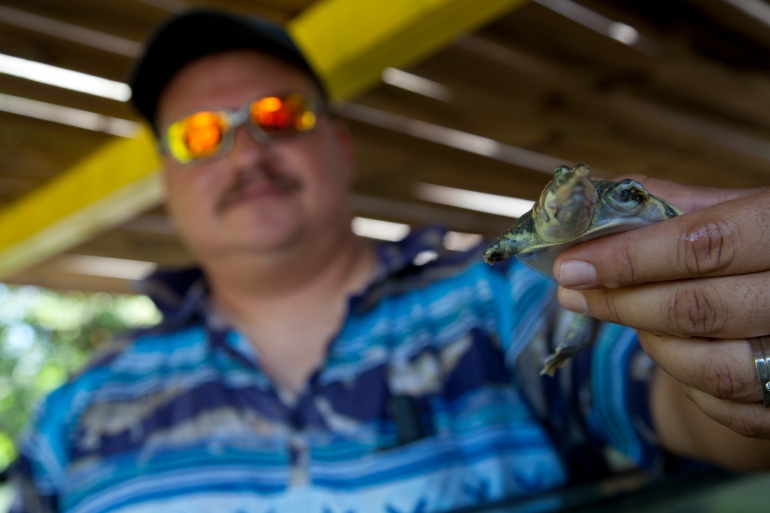 October 7, 2011. (8 of 13) Everglades, Florida. Miccosukee Tribe member, John Tigertail is a resident of the Everglades. John inherited a family business of airboat tours, but took the business up a notch by creating “Tigertail’s Airboat Tours” in 2007.  Not only does John own his airboat tours company but also has been working with the Local Wildlife Unit for 8-10 years. John is the one that gets called on when residents find wildlife on their yards. He picks up the wildlife from these yards, and takes them to his the camp he grew up in, “Tigertail Island” where he takes care of the wildlife. He has a gator pond, with a varied range in size of alligators. He has a turtle pond, hog pond, banana trees and tikis at this main campsite of his. “We keep them in a natural state, that way we can keep growing them and when they are old enough, we let them back out into their habitats” says John. (Photo by: Vanessa Castillo) 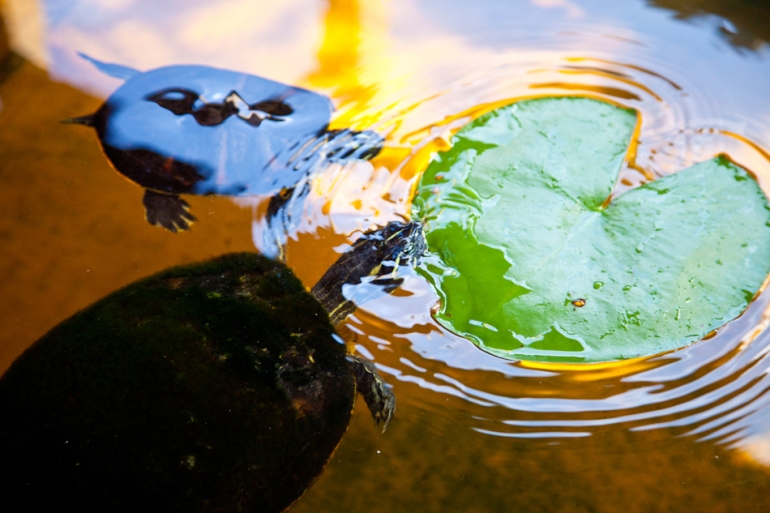 October 7, 2011. Everglades Fl. Red-bellied Turtles snacking on fresh lily pads. John Tigertail owns an airboat touring company in which he takes visitors around the Everglades National Park and to his farm where he keeps alligators, turtles, and hogs. “I never really had dogs or cats, these are my pets.” (Photo by: Natalie Edgar) 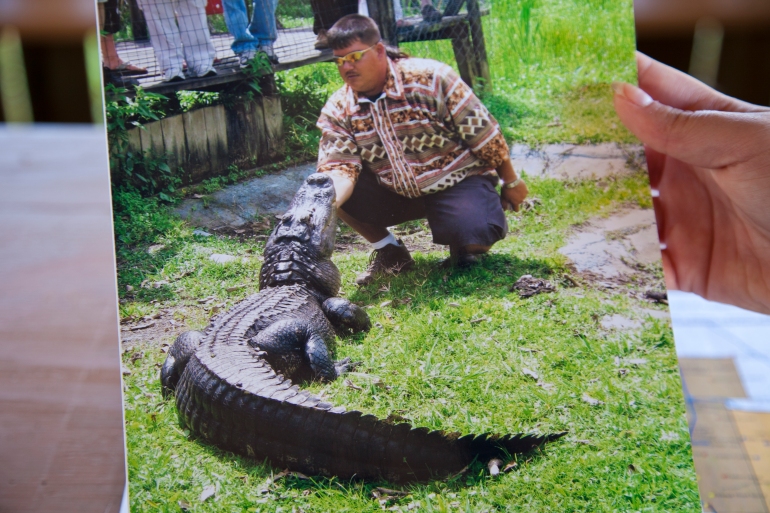 October 7, 2011. (10 of 13) Everglades, Florida. Native American, John Tigertail has a moment of reflection. This picture is John when he was 29 years old, and had just opened up his “Tigertail’s Airboat Tours” for business in 2007. John says “This was me on one of the first tours, showing the pet alligator I grew up with. I’ve had this alligator for 30 years, and I’m 34 years old so, you can see, I grew up with this gator. Her name is Momma Gator. That’s my pet.” (Photo by: Vanessa Castillo) sssOctober 7, 2011. (11 of 13) Everglades, Florida. Leaving the area “Swimming Hole”, John points out this five-foot alligator. “He’s sunbathing” says John, who knows a lot about the Everglades and its nature, for John has been living in the Everglades since he left the hospital as an infant. His father was member of the Miccosukke Tribe in Florida and 1 year after birth, John Tigertail was registered to the Miccosukee Tribe as well. John grew up with his father’s side of the family, learning how to hunt, ride airboats, build tiki’s, etc. “It’s a way of life” says John. (Photo by: Vanessa Castillo) 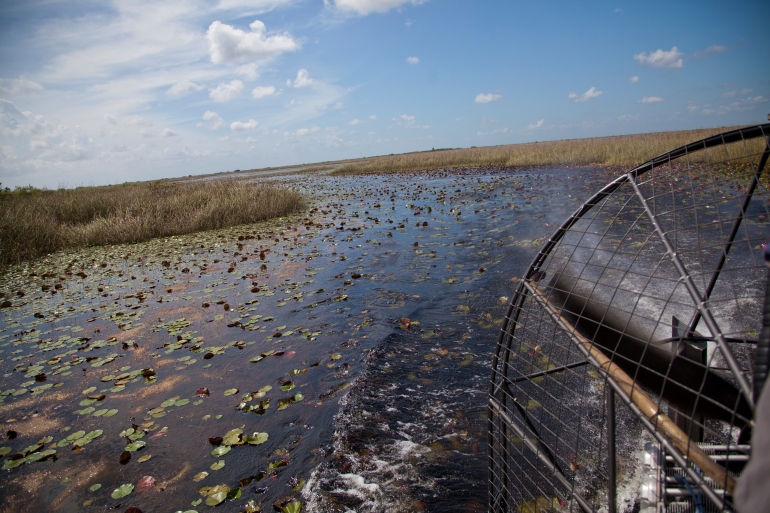 October 7, 2011 (12 of 13) Everglades, Florida. John Tigertail is a registered Micosukee Tribe member who has been living in the Everglades since he was an infant. John says “This is home, it’s all I know. I’ve had some bad experiences living out here. I’ve been bitten and chased by alligators, I’ve been bit by a Brown Recluse spider and it was eating up inside, but doctors got all the venom, but I wouldn’t change any of those experiences for nothin’. They made me who I am today, and I love it out here. It’s a breath of fresh air, literally.” (Photo by: Vanessa Castillo) 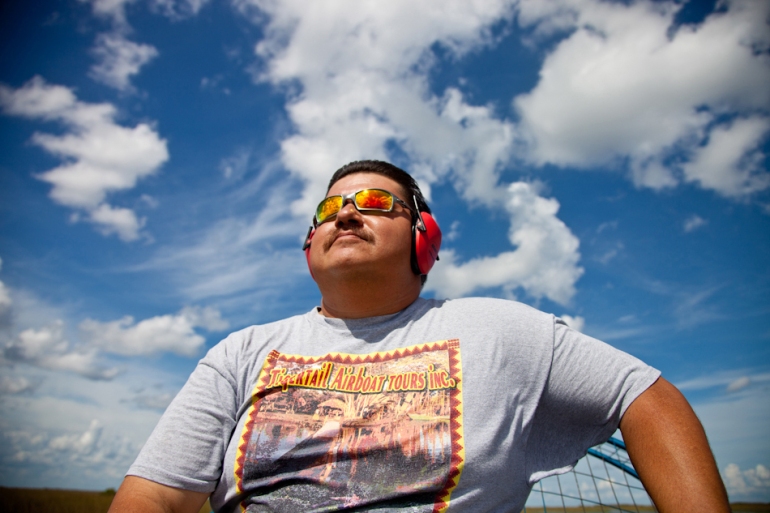 September 30, 2011. Everglades, Fl. John Tigertail is a part of the Miccosukee Indian’s Panther clan. He was raised in the Everglades and started his own company, “Tigertail Airboat Tours Inc.” in 2007. John has been around airboats his entire life, his father first began in the 1950s. (Photo by: Natalie Edgar)

This site uses Akismet to reduce spam. Learn how your comment data is processed.